Laurel resident Jeremy Roberts grew up in Georgetown, the capital of Guyana and called the “Garden City of the Caribbean.”

Like many young boys there, he played soccer but also grew to love field hockey, a sport that is played by few American males when compared to football, basketball and baseball.

“By starting early I had a little bit of an advantage and it was something I was pretty good at,” said Roberts, 53, who began playing when he was 6. “I guess it suited my abilities.”

And it also suited his physical frame. 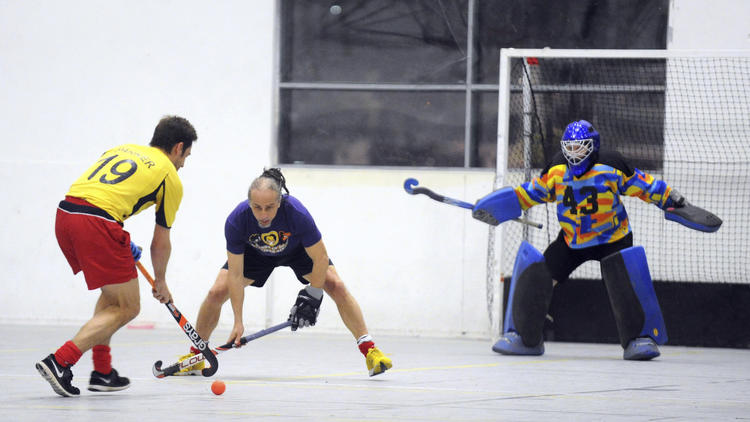 Jeremy Roberts of Laurel, center, crouches in a defesnsive stance protecting his goalie Bill Levey of Alexandria against a shot by Alvaro Salcedo of Baltimore during a co-ed adult indoor field hockey league at Get Good Field House in North Laurel on Friday, Feb. 20. (Brian Krista / Baltimore Sun Media Group)

Field hockey, played at the Division I level by many women’s college teams, is a sport that doesn’t require a male player to be more than six feet tall and 200 pounds, like a top football quarterback.

Roberts, 5 feet 8 inches and about 155 pounds, is trying to bring his love of field hockey to a wider audience, including American males.

In the United States, field hockey is mostly a female domain as most American men grow up playing other sports. Field hockey first became an Olympic sport for men in London in 2012.

Roberts said getting a boys program established is an “uphill battle.”
Getting adults to play has been easier. Roberts helped start a co-ed adult league, the Baltimore Washington Indoor Hockey League, which played its first game Jan. 16. Games are played Friday nights at Get Good Fieldhouse, an indoor facility on Freestate Drive in North Laurel.

“It has been really popular so far,” said Roberts. “We want to continue for the next year. It is pretty much for adults and we have a lot of national team players.”

Roberts is on the USA masters team and took part in a tournament last year in The Netherlands, where field hockey is a very popular men’s sport.

Pereira, 50, a long-time Fulton resident, grew up in Montgomery County and graduated from Richard Montgomery High in Rockville.

Both of his parents are from India, where men’s field hockey is popular. His father was well aware of the sport when he moved to the United States in the 1960s but a family trip to the Mall in Washington in the late 1970s re-introduced Pereira’s father to field hockey.

“One day my mom decided that we take a picnic right next to the reflecting pool,” recalls Pereira.
Nearby were some open fields used for athletic events. “We just happened to be there and an Indian guy walked by and was holding a field hockey stick,” he says. “My father said, ‘Let’s check it out.’ It became the worse nightmare for my mother.”

The nightmare began when Pereira and his two brothers, who had played baseball, basketball and football, became immersed in the game of field hockey, thanks in part to their father. They played on club teams but could not play in high school or college since the sport is not offered as a men’s NCAA sport in this country.

Pereira, who works for the National Transportation Board, studied computer science and information technology at University of Maryland, Baltimore County, where he helped coach the women’s field hockey team.

“We try to make

[the league] as social as possible,” Pereira said, adding that is the approach of many European clubs.

With that in mind, the league had a mardi gras theme when they met to play Feb. 20.

One of the few female players in the Friday co-ed league, Cabrey lives in North Virginia and was a standout field hockey player at Lafayette College before she graduated in 2012.

She scored the winning goal for the U.S. indoor team against Argentina in 2013 and is a former assistant coach at Central Michigan University. Cabrey works at Georgetown Hospital and teaches a U-19 field hockey club in Gambrills.

Cabrey heard about the North Laurel Friday night league after meeting Roberts and Pereira during summer pickup games at Georgetown.

Cabrey understands the limited opportunities for American males who want to play the sport.

“It is more of a cultural thing,” said Cabrey, who points out that young boys in The Netherlands grow up playing field hockey. “I have had this conversation before: How do we grow the game” in this country?

In a small way Roberts and Pereira are doing that with their Friday nights league.

“It is hard. It is a women’s sport” in this country, Pereira admits. “Guys have a lot of opportunities to play other sports. I understand that.”